A small subset of the above functionality has already been merged and will be available in Scala 2.11 once it's released. However, the bulk of the new backend won't. For all practical purposes, don't use that small "subset" available in scalac. You'll be missing on the delta with respect to full-blown new backend, and it's a huge delta:

To get up and running, please skip to Getting Started.

It might be the officially supported optimizer, but not everyone likes it. It's very telling a major Scala framework recommends against using it.

You might also have heard "everything will be better with MethodHandles". Well, who knows, it might turn out that way in the end. Instead, the new optimizer ("BCodeOpt") improves performance today, while leaving the door open to future developments (by handling lambdas in a manner that's forward-compatible with MethodHandles).

1.2 And a faster code emitter, too

The release version of scalac processes closures by creating inner classes early in the compilation pipeline (the "traditional" approach to closure conversion). Instead, the new backend postpones the creation of AST nodes for closures, simplifying the job of specialization, erasure, and other compiler phases.

Under "modern" closure conversion, the bytecode emitter takes responsibility for producing the JVM-level representation of closures. This is the default (compiler option -Yclosurify:delegating ).

2 What's new in the new optimizer

The existing inliner, once activated, will inline both callees found in external libraries (against which the program is being compiled) as well as callees in the program being compiled. There's no way to tell it to focus only in the intra-program case. The advantage of applying intra-program optimizations only is that at runtime updated libraries may be used (granted, binary compatible ones).

The inliner currently used in scalac has a few problems:

Instead, the new optimizer just follows a simple principle:

only inline @inline-marked methods, and always inline them, including under separate-compilation

Thus the new inliner is deterministic, not dependent on heuristics about method sizes or similar. The only additional requirement (if you will) is that the method to dispatch (the one marked @inline) can be found via the static type of the receiver, e.g. in a Range.foreach() callsite the type of the receiver must be Range or subtype (in general, not a super type where the @inline method is defined). After all, inlining is a conscious decision: making that explicit via the type of the receiver is straightforward. As a result, the @noinline annotation doesn't play a role anymore.

The new optimizer provides detailed logging about performed inlinings, as well as diagnostics when inlining proves unfeasible (down to the culprit bytecode instructions). With that, fixing the causes of non-inlining takes way less effort, as the following shows.

The warning makes sense: loop() is a local method:

The bytecode-level counterpart, loop$1(), was emitted as private, as javap output shows:

Some anonymous closures depend only on apply() arguments, for example the char filter function:

In these cases, the new optimizer avoids repeated allocations by keeping (in a static field) a singleton-instance that is reused.

After dead-code elimination, closure state comprises only what is actually accessed.

These features are more useful on Android (besides micro-benchmarks) where a vast RAM doesn't masquerade redundant allocations.

3.1 How much does it add to compilation time?

The new optimizer (except the whole-program step) is task-parallel: 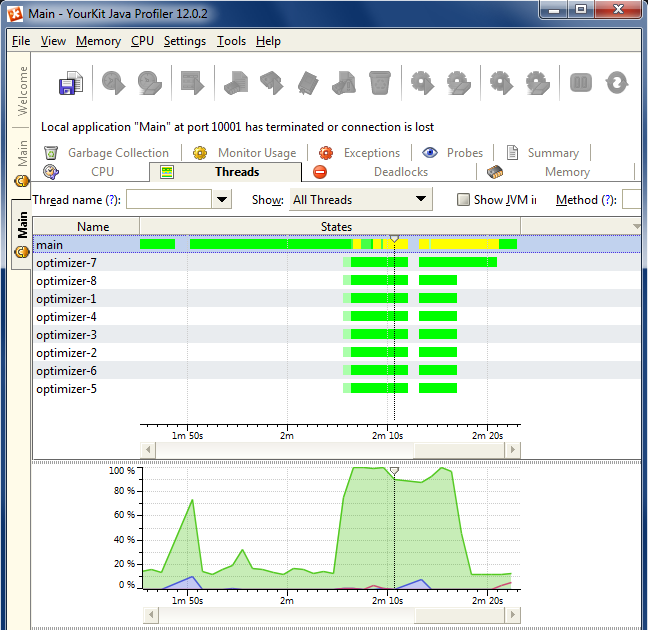 There's no reason to limit the worker pool to 8 threads, that's configurable via -Ybcode-emitter-threads N

Let's take scala/scala as case study, compiling src/compiler and src/reflect (on the one hand) and the standard library (on the other) using:

The above reflects not so much code reductions (in terms of instruction count) but smaller constant pools due to Late Closure Classes (an LCC just delegates to the class where the anon-closure is instantiated, which usually already has the constant pool entries that under "traditional" closure conversion have to be duplicated in the anon-closure-class).

To benefit from code size reductions as well, -Ybackend:o1 (intra-method optimizations) or up will do the trick. Moreover, on a multicore -Ybackend:o1 doesn't increase appreciably compilation time, I'm actually thinking making it default.

For example, method driver() in test/files/run/t7181.scala results in:

Speedups in the range 10% to 20% have been observed against the latest scalac. The upper range is achieved by having a compiler optimized by the new optimizer compile using -Ybackend:GenBCode -Yclosurify:delegating (ie unoptimized compilation, using the new bytecode emitter and Leaner Closure ASTs). Just one data point:

Right now the new optimizer alone makes scalac only marginally faster. Instead, the 15% speedup mentioned above is due to the compiler doing less work: (a) Leaner Closure ASTs, (b) the new bytecode emitter, and (c) lower GC overhead. That's normal: scalac is dominated by factors not optimizable (at least not in the short term). Examples abound:

The new optimizer may well make your code run faster. To find out, give it a try.

The first step is checking out branch GenRefactored99sZ of repository https://github.com/magarciaEPFL/scala

4.0 Using sbt to build your project with the new backend / optimizer

Section Using Scala from a local directory covers the changes needed in your project's Build.scala:

where "scala-with-new-backend" is the folder one gets after following the steps in the sub-section above (cloning, checking out branch GenRefactored99sZ, building the compiler with ant).

Each optimization level includes all optimizations from lower levels, and assume the new bytecode emitter (GenBCode) is active:

Nota bene: In order to ease migration from old to new optimizer, for now no error is emitted when mixing compiler flags for old and new optimizer. In this case the compiler silently falls back to the old optimizer. This "feature" allows keeping the test suite as is: all those tests asking for -optimise or one of its variants can run without modification.

Diagnostics are displayed via -Ylog:jvm , for more details add -Yinline-warnings and if that's not enough adding -Ydebug will show both the individual bytecode instructions subject of the message as well as a listing of the enclosing method (all in ASM textual format, which is always available unlike javap).

Another useful flag is -Ygen-asmp <folder> which similar to -Ygen-javap will emit textual files but in ASM format.

What others are doing:

5 Putting the new optimizer through its paces

5.1 Optimizing the compiler and the standard library themselves

An attempt to ant nightly on a clean checkout of branch GenRefactored99sZ doesn't achieve the desired effect, because the old optimizer is used (-optimize activates the old optimizer). In fact, the compiler used for the first time to compile the new backend doesn't understand yet flags like -Ybackend:o1.

In order to run the test suite under the new optimizer, one may hardcode the optimization level of choice as shown below (run ant quick.clean && ant for the update to take effect).

With the optimization level hardcoded as shown above, one may also delete all occurrences of "-optimise" in build.xml and build-ant-macros.xml. That way, ant all.clean && ant && ant nightly will both run the test suite and build a distribution optimized under BCodeOpt.

In principle, method handles can help with specialization, structural types, and lambdas. The prototype in branch GenMHv3 puts MHs to work to replace anon-closure-classes, with mixed results (the good: smaller jars; the bad: performance on JDK7). For perspective, the delta with respect to the non-MethodHandles backend is:

Sources can be obtained via:

This prototype requires -target:jvm-1.7. Right now scalac doesn't produce the newest class file format of JDK8. In the meantime, -target:jvm-1.7 can be used on that platform. A discussion about performance at: https://groups.google.com/d/msg/scala-internals/uBxprJixpwk/jG78X1k_92IJ

Those Java classes are a thin layer of functionality on top of the ASM library, which is written in Java. Package scala.tools.asm.optimiz contains intra-method optimizations which can be performed without knowledge about Scala-level types. The bulk of the optimizer, in constrast, is written in Scala.

There's no contradiction. Other languages use MethodHandles for what Scala would accomplish via structural types, and in that setting MHs are faster than Java reflection. Instead, the prototype described in Sec. 5.2 leverages MHs in an area far more important to Scala (anonymous closures), and in that setting they don't outperform the Late Closure Classes that the new backend emits.

As Sec. 5.1 shows, the test suite passes under all optimization levels, from -Ybackend:GenBCode to -Ybackend:o1 through -Ybackend:o3. It's always possible to include additional tests, for a correct optimizer: they will also pass! Thus if you are not convinced about the correctness argument, how about finding counter-examples? If you find one, please post it at scala-internals for discussion.

Please help us help you. Regarding additional tests, an offer you can't resist:

In case you'd like to shoot up your Scala contributor ranking at https://github.com/scala/scala/contributors consider this: YOUR TESTS ARE WELCOME !!!

How to write bytecode-level tests? It all starts subclassing BytecodeTest. As an example, a unit test for constant folding: https://github.com/magarciaEPFL/scala/commit/3281236219ad0a7894a0c1c743e8550e2ce20dbf